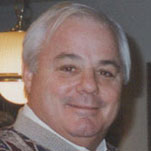 “He would be walking this John Wayne walk. He was the best-looking man getting off that train, because he would just glow.” ~ Lisa Schunk

He and his wife Lisa lived in Baldwin, NY and Lisa drove him to the train station every morning and also picked him up in the evenings. Her quote above describes that and shows how much she loves him.

Though they never had any children, he was a great uncle to his eight nieces. When reading his Legacy.com guestbook you can read a few of their entries, but of course also a lot of entries from all the people missing him. Probably a reason why he was their favorite uncle was that Edward stayed young at heart.

He played Santa for his nieces many times, due to his wife wonderful cooking (he loved Italian food), he didn’t really need a pillow to hide under his Santa suit.

I’d like to end this tribute with an entry posted in the above mentioned guestbook.

Eddie,
A day does not go by that we don’t think about you and smile. We miss you so much, your bear hugs most of all. Our faith assures us that we will see you again, and we’re counting on you for a hug. Your kind spirit has touched us all, we are all so blessed to have known you and loved you. ~ Sam and Chris Logios, RVC, New York